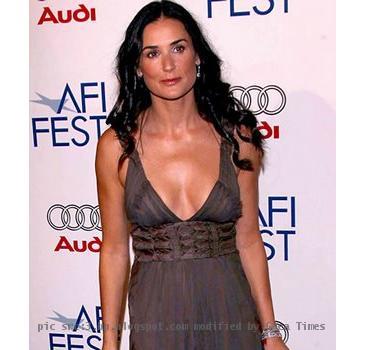 LOS ANGELES - Hollywood actor Ashton Kutcher has disappointed his actress-wife Demi Moore by failing to maintain the toned physique he worked up for his new movie “Killers”.

The 32-year-old, who plays an undercover assassin in the movie, worked hard to tone his body but says it isn’t practical to maintain it for very long, reports aceshowbiz.com.

“Unfortunately… I kind of wish that I hadn’t (let her see the movie) because now she expects (my body) to look like that and it doesn’t. You can’t maintain that. That’s not possible,” said Kutcher.

“I disappoint her every evening. I walk in to get ready to go to bed and she’s just, ‘Oh’. She says, ‘You know what that’s capable of, you’re not living up to your potential’,” he added.

LONDON - Supermodel Naomi Campbell is trying to curb her temper by converting to the Kabbalah religi...

WASHINGTON - Hollywood star Ashton Kutcher has revealed that he and his actress wife Demi Moore like...

WASHINGTON - Hollywood star Ashton Kutcher has revealed that he and his actress wife Demi Moore like...

Demi Moore, Ashton Kutcher in Israel to work on marriage?

Kutcher, Moore off to Israel to work on marriage?

Kutcher to revive 'Punk'd' with Bieber

SYDNEY - Actor Ashton Kutcher has come up with a second television show based on one of his Twitter...
Copyright© 2010 The Gaea Times