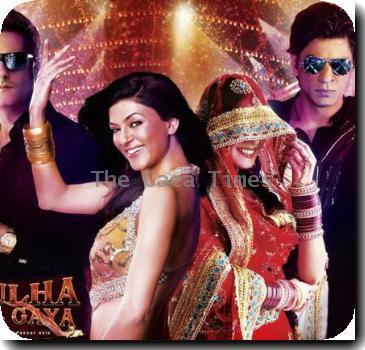 Settled in Trinidad and Tobago, Tej Dhanraj aka Donsai (Fardeen) is a rich playboy who lives to party hard and have fun with the most attractive gals minus in commitment. His only good female friend is the hot shot super model Shimmer (Sushmita Sen). Donsai hopes of leading a fun life ahead as well comes crashing down when his late father’s will is declared by his lawyer Mr. Vakil (Vivek Vaswani). A clause in the will makes it compulsory for Donsai to get married to his father’s friend’s daughter living in a Punjab village if he wants to inherit the huge riches of his father running into 5 Billion Dollars. A reluctant Donsai only agrees for the same when Vakil suggests him a loophole. So he marries the Punjab small town girl Samarpreet Singh (Ishita Sharma) in quick court marriage and comes back to Trinidad minus her. He stops any communication with her but dutifully keeps sending a fat cheque every month end to her family. Longing for him, the sweet and simple Samarpreet then decides to go to Trinidad herself. But on landing at his doorstep she is in for a cultural shock and is stunned to see Donsai having fun with other females. She is even insulted and thrown away from the house by his bodyguards even before they both meet. Following her accident she lands up in Shimmer’s house. The snooty, high society girl Shimmer at first detests her but after hearing her story she decides to help her. How Shimmer manages to help Samarpreet woo Donsai back by completely transforming her as a hottie Samara and how in the same course also learns a lesson or two about true love of her long time lover PRG (Shah Rukh Khan) forms the rest of the plot.

With a plotline that offers nothing new apart from a unique location setting in the West Indies isles, the predictability of Dulha Mil Gaya puts you off to sleep long before it is over. Shah Rukh Khan in a special appearance making a proper entry just post interval too cannot salvage the film. Just by taking off her glasses and appearing a bit mod, Samarpreet manages to hoodwink Donsai into believing she is someone else, just like Rab Ne Bana Di Jodi’s SRK’s Suri character! While the first half breezes past quickly, the problems begin when the 2nd half begins. After SRK’s entry your expectations rise but as soon come crashing down by some really juvenile sequences added. The whole cruise sequence is extremely tackily shot. The climax too is simply lame. Lalit Pandit’s music works well when watched on screen. The entire track of lovers played by Tara Sharma and her DJ boyfriend Mohit Chaddha is a waste of time.

Fardeen puts in the efforts and delivers an okay performance. Sushmita Sen never looked so hot before. Her comic timing is very good. Newcomer Ishita Sharma last seen in a small cameo in Dil, Dosti Etc. is extremely likeable. Be it emotional sequences or comic ones, she gives it her all and leaves you mighty impressed. Tara Sharma looks good but still hasn’t got rid of her pathetic dialogue delivery. Mohit Chaddha is passable. Vivek Vaswani is good but Johnny Lever is complete wasted in the role of Fardeen’s butler. Finally, SRK even his small party, gives a glimpse of his famous romantic lover charm. The superstar puts in his 100% in his half backed character.

Debutante director Mudassar Aziz’s Dulha Mil Gaya could have worked had it been released a decade back. But now it seems too outdated. It constantly keeps you giving a feeling of déjà vu with sequences appearing quiet similar to films like Ponga Pandit, Namastey London and even Dil Bole Hadippa!

Give it a miss guys unless you are a hardcore Shah Rukh Khan fan who doesn’t mind sitting through a 150 minute bore only to catch a few sequences he succeeds in holding your attention in an otherwise boring film.