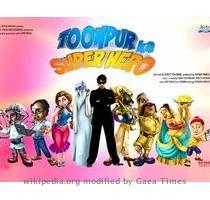 MUMBAI, INDIA (GaeaTimes.com)- In what is being pitched as the first live action- 3D animation picture of Bollywood, ‘Toonpur Ka Super Hero‘ is all set to entertain the audiences to the fullest when it hits theaters across the country this Friday. The movie which has been directed Kireet Khurana, has Ajay Devgan, Kajol edging the lead roles while a number of animated characters accompany them to ensure that the audiences have a gala time. The promos of the flick has already created a stir among the younger audiences with the interesting bunch of cartoon characters that it has to offer.

With Christmas just round the corner and the festive spirit in the air, the makers of ‘Toonpur Ka Super Hero‘ could not have hoped for a better timing to release the fun flick. The promos of the movie suggest that it is all set to add a whole lot of cheer to the festivities of the season with the action adventure live animation flick which is a first of its kind in the Hindi film industry. While talking about Ajay Devgan’s latest venture, trade analyst Taran Adarsh described ‘Toonpur Ka Super Hero’ as a ‘path-breaking’ movie which is sure to be enjoyed by children and adults alike.

In the meanwhile, trade analysts have predicted that the success of ‘Toonpur Ka Super Hero’ is going to be quite pertinent given the fact that if the flick does well in the box office, it would impart the much-needed impetus to production houses to make animation flicks in Bollywood. With names such as Kajol and Ajay Devgan associated with it along with its interesting storyline, ‘Toonpur Ka Super Hero’ is likely to be a welcome treat for movie-goers.