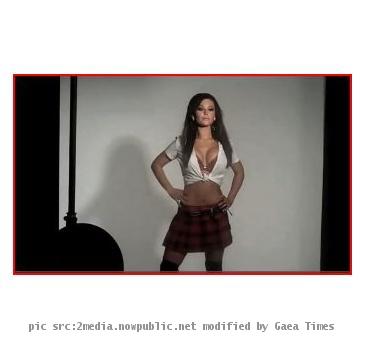 NEW YORK (GaeaTimes.com)- Its time to know the secret of Jenni “JWoww” Farley’s picture perfect body. The “Jersey Shore” hottie is all set to release a new book on February, named “The Rules According to JWoww” where she has penned down all her workout regimes, food habits, diet charts for the people who wants to live a perfect lifestyle. On the other hand, the book will also have instructions on do’s and don’ts of dating from “Jersey Shore” perspective.

In the book cover the voluptuous beauty is seen in a super short red skirt, high heeled red shoes and a black coat. The “Jersey Shore” guidette will also be instructing about the “shore tested secrets” of dating a guy. One of he best features of the book is JWoww’s inclusion of some unique terms like “gorilla juice head” etc., media reports. Some media outlets claimed that JWoww was inspired by 1995 book “The Rules: Time-Tested Secrets for Capturing the Heart of Mr. Right”. The sultry reality star appeared in one of the events in New York last week to promote a nutritional supplement. The media outlets say that in her new book, JWoww has said that she takes supplements twice a day to be healthy and keep herself happy.

Speaking about her health regime, JWoww said that she works out five days a week her body builder boyfriend trains her. JWoww said that her boyfriend teaches her the “right way” of work out. However, she said that her food habit is quite normal as he eats everything from cheese, pizzas etc. but in a limited amount. The reality show bombshell is also busy in the post promotion of “Jersey Shore” season 3, which will hit the television screens, early next month.

J-Woww turns down $40k Playboy offer for 'a better opportunity'