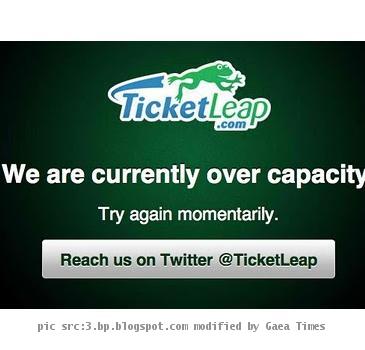 SAN DIEGO (GaeaTimes.com)- The fans of superhero flicks and Hollywood blockbusters are no strangers to Comic Con, the annual event what makes Hollywood’s top studios making a beeline for it with their upcoming movie trailer and promos. The event is held in July every year and this year the venue is in San Diego where it will lure the movie buffs for 4 days. The event’s organizers started giving away the tickets online yesterday but it did not prove to be a smooth sailing affair. The comic con fans who were let down by the site woes got irate and they took to Twitter and similar social networking sites to vent their anger. Later it became clear that the Comic Con International’s online ticket reservation system crashed simply because of visitors overload. The server failed to tackle the online rush and it gave in.

The Comic Con International management wasted no time in apologizing to the irate users and said in its post that things would be restored as soon as possible. The team wrote in Twitter, “While we know the process is slow and frustrating, badges are being processed and sold”. This year the Comic Con team resorted to suing the aid of TicketLeap till the teething troubles could not be avoided. The partner site aka TicketLeap also expressed apology for the trouble caused to the users.

The Comic Con online ticket booking system was soon restored and the fans wasted no time. The passes for 4 days of the event got sold off very fast. Last year, 120000 people attended the event and this year the number is likely to be more.

LOS ANGELES - Hollywood actress Angelina Jolie has been turned into a comic book heroine. The g...

LOS ANGELES (GaeaTimes.com)- Just a week to go and the Americans will celebrate the most awaited...
Copyright© 2011 The Gaea Times