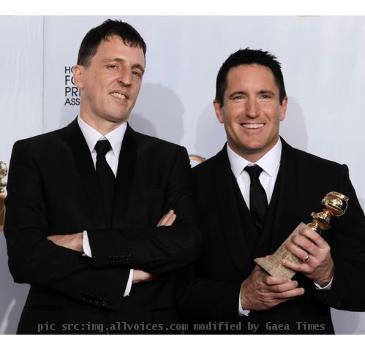 BEVERLY HILLS (GaeaTimes.com)- Last Sunday the entertainment industry a glitzy Golden Globe award ceremony that took place in Beverly Hills. Trent Reznor was the proud winner of the award for the Best Original Score-Motion Picture. Trent Reznor and his work partner Atticus Ross took home the award for their mood-effecting input to “The Social Network”. It could be mentioned here that at the beginning, Trent Reznor rejected the same project when David Fishner made him the offer.

In an interview, taken right after the award ceremony got over, Trent Reznor stated that the main problem with him was that it is difficult for him to say no, when something interesting like the project, comes up. He also mentioned that if a person is playing around the same thing over and over again, it become more of an execution phase than that of a creation phase. He added that his great passion towards music was what pulls him towards taking up challenges. Trent Reznor stated that his experience with The Social Network has remained simply unparalleled. The music composer has been very both energetic as well as enthusiastic at the time of working with people who have the same goal. He said jokingly that he would be interested in pushing himself a little and working outside of his comfort zone. Receiving this prestigious award came to him most unexpectedly. he himself was shocked at the time he heard his name as the winner.

Trent Reznor had remained the founder of “Nine Inch Nails” and has mostly remained a rock musician. Coming out of the image of a rocker and making soft music with splashes of moody undertones and mysterious noises was something he had never done previously. However, what his rock-star image could not do, was done by making a different genre of music. He mentioned in his acceptance speech that the award seemed “surreal” to him, since he never expected he would score for movies and receive an award for that.

SYDNEY - One of the least respected figures in English cricket, Duncan Fletcher, has riled Australia...

SYDNEY - Australian cricket captain Ricky Ponting would need to be mindful of not repeating hi...

MELBOURNE - Qantas' A380 flight QF32 passengers and crewmembers were "very, very lucky" that the hig...

Honesty is the top quality voters expect in their presidential candidates

Singapore Airlines to replace engine part on A380 plane

SINGAPORE - Singapore Airlines will replace one component of the Rolls Royce engines on all 11 of it...

SAN FRANCISCO (GaeaTimes.com)- The traffic on the Bay Bridge which connects San Francisco with O...

WASHINGTON - A new study has suggested that young mice separated from their mums for longer period...
Copyright© 2011 The Gaea Times