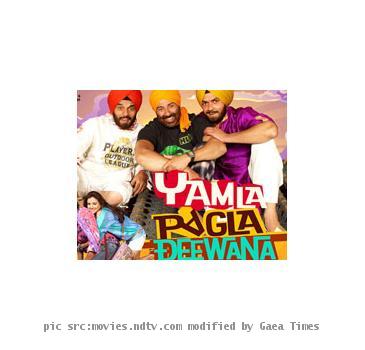 MUMBAI, INDIA (GaeaTimes.com)- “Yamla Pagla Deewana”, the much-awaited Deol centric film was released today. The trailer of the film did not have any fascinating element apart from the presence of the Deol combo. After the failure of “Apne”, Sunny Deol, Dharmendra and Bobby Deol, returned to the silver screen, in a desperate attempt to gain back their momentum in Bollywood and review says, that they were successful to an extent.

“Yamla Pagla Deewana” is centered around the age old ‘lost and found’ Bollywood formula. Dharam (Dharmendra) reunites with his estranged son Pramveer (Sunny Deol), who is now a well established NRI. The latter shows some of his typical actions in the film, by often using his famous ‘Dhai Kilo Ka Hath’ to get his way. However, the description of the father son separation was kept verbose and it thereby lacked the emotional touch. The other brother in the story, Gajodhar (Bobby Deol), is a typical lover boy, good for running around the trees. His love, Saheba, played by newcomer Kulraj Randhawa parts from him. However, with the arrival of his protective brother, he sees some new hope in his love life.

Although “Yamla Pagla Deewana”, is meant to be comic, the two sons of Dharmendra fail to showcase the best of their comic timings. According to the review, some of the comic scenes in “Yamla Pagla Deewana” were exaggerated and unnecessary. For example, hijacking an elevator by Sunny Deol was rather silly. The film also tried to revive the cult scene from “Sholay” with Sunny Deol getting drunk while creating a ruckus from the top of a water storage tank. The comedy was occasionally good but dominantly lacked enough crisp. Newcomer, Kulraj Randhawa was pretty but lacked screen presence.