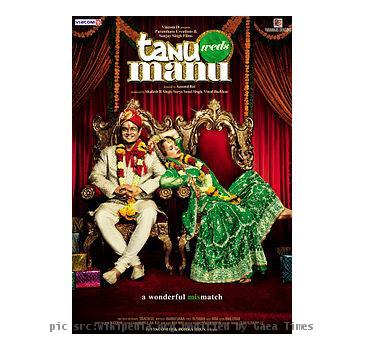 MUMBAI, INDIA (GaeaTimes.com)- Bollywood actress Kangana Ranaut who is mainly known for playing dark and brooding roles in psychological thrillers, is all set for a makeover in 2011. Her upcoming comedy ‘Tanu Weds Manu’ where she is pitted against actor R. Madhavan shows her in a completely new avatar which may amaze her fans. The industry buzz suggests that the actress is willing to break out of her serious image in the movie where she plays the role of a lively small town girl in the film. The 23-year-old actress plays the role of Tanu in the film and she is being paired up with the ‘3 Idiots’ actor for the first time.

The film ‘Tanu Weds Manu‘ has been directed by Anand Rai. He is sure that the new avatar of the actress will be loved by the viewers. He said that the actress was “amazing at the way she pulled off the character of Tanu”. The trailer of the movie is out and it has created a buzz in the industry. Interestingly, she will be seen mouthing some of the choicest slangs in Hindi in the film. Recently, actress Rani Mukherjee became the topic of discussion after mouthing similar expletives in the hard hitting ‘No One Killed Jessica’.

In ‘Tanu Weds Manu,’ actress Kangana Ranaut had faced some hesitation and inhibition while shooting for the scenes where she had to abuse R. Madhavan by suing expletives. However, the director explained to her how the raunchy slangs were vital to the plot of the film and that made her see reason. She later said that shooting those scenes were hilarious!