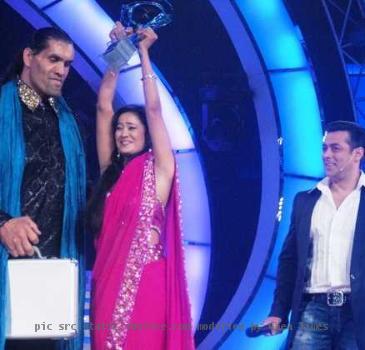 Dressed in a pink sari with attractive jewelery, Shweta Tiwari looked ravishing during the “Bigg Boss” finale. Given the popularity of The Great Khali, it really seemed to be tough competition but Shweta Tiwari took away the title. The winner broke down into tears in excitement and happiness when her named was announced. The actress thanked all her fans for their support and love as they made her dream come true by voting for her. The stunning actress said that she is delighted to bag the title. Shweta Tiwari said that after staying away from her daughter for about three months, she wanted to come out of the house as a winner. However, the charming actress was modest when she said that she never thought she would survive so many days and reach the top two position.

Shweta Tiwari told that she could not believe her eyes and ears when Salman Khan raised her hand and declared her as the winner. The actress said that she feels great as she is the first female winner of “Bigg Boss”. The “Kasautii Zindagii Kay” actress also said that she was nominated 12 times when she was in the house but every time she was rescued by public votes. However, the actress said that the support from her fans and audience gave her the strength to survive inside the house.