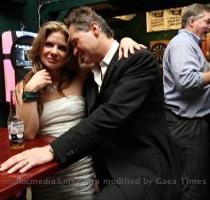 SAN FRANCISCO (GaeaTimes.com)- Carol Anne Riddell, 40 and John Partilla 42, have an interesting story behind their marriage. The couple no doubt got hitched in an unusual way or rather situations were slightly unconventional. While many of you after getting to know of their story would think that the two had been extremely selfish on their part, others might fight that nothing is wrong since life does take twists and turns at certain points. The love story seized attention after it came out recently at a reputed newspaper.

Former television reporter Carol Anne Riddell and advertising executive John Partilla met each other in 2006 at a pre-kindergarten school where their children studied. It was at the Upper West Side school. Every thing started as what normally happens between guardians who become known faces while dropping their wards off to school. Both were married to other people. However, these two became good friends and the friendship was dragged to their respective households. Both families got well with each other and soon shared a close bonding. A source close to the couple reports that the two families would often go out for family gatherings and vacations. For two years every thing was normal until one day the ice was finally broken by John.

Carol Anne Riddell said that John Partilla finally confessed his feelings for her while the two of them were hanging out. After moments of silence she too told him that she had even fallen in love with him. With this the two decided to open things up in front of their families. We wonder how things must have been when the families came to know of the stark reality. After obtaining divorce from respective spouses, the two exchanged vows and are happily married with each other.

LONDON - A US cosmetic surgeon has filed a lawsuit against a former patient for claiming in an onlin...

Plastic surgeon in US sues patients for bad online reviews

WASHINGTON - A plastic surgeon in US is suing his former patients because they posted bad reviews...

LONDON - Several of Kate Middleton's relatives will not be invited to her wedding, courtesy a family...

Who will pick the Royal wedding tab - Prince William or Brit taxpayers?

LONDON - It is being said that Prince Charles will pick the tab for Prince Williams and Kate Middlet...

Kate Middleton's parents 'thrilled' by her engagement to Prince William

LONDON - Kate Middleton's parents are extremely happy now that their daughter is engaged to her long...

Prince William and Kate Middleton to marry next year

LONDON - Britain's Prince William and his long-term girlfriend Kate Middleton are to marry next year...