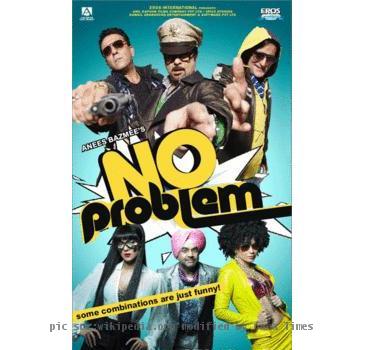 MUMBAI, INDIA (GaeaTimes.com)- Cine-goers who prefer to watch multi-starers have something to look forward to this weekend as the Anees Bazmee directed “No Problem” is one of the releases of this Friday. The movie has a huge star cast that comprises of Anil Kapoor, Sanjay Dutt, Sushmita Sen, Akshaye Khanna, to name a few that sure to enable high degree of footfalls in the theaters when it releases today across the country. With ace director Anees Bazmee with his reputation for making ‘masala’ films taking care of the directing responsibilities of the flick, the audiences are expecting to witness high comic dose and other entertaining elements to ensure that the audiences have a gala time.

Industry experts have predicted that in the first few days of its opening “No Problem” would be able to garner 60% to 70% footfalls in the theaters with its high star cast and the new promos that has accentuated the hype among the cine-goers. At the same time, the combination of veteran actors such as Anil Kapoor, Sanjay Dutt, Paresh Rawal, Akshaye Khanna coming together would surely be a too good opportunity to miss for the audiences.

Despite the fact that “No Problem” would definitely be in the must-watch list of the ardent Sanjay Dutt and Anil Kapoor fans, critics have been scathing in their reviews of the flick. Many critics have reiterated that the movie lacks a crisp plot and there is also a huge dearth of funny sequences that can ensure the audiences roll with laughter. However, whether the audiences feel the same way about “No Problem” is something that would be clear in the upcoming days.