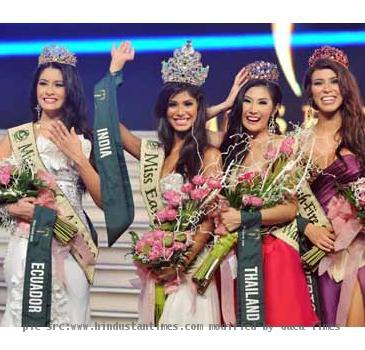 HO CHI MINH CITY, VIETNAM (GaeaTimes.com)- For 20-year-old Nicole Faria, this was surely a dream come true. The Bangalore girl was crowned Miss Earth 2010 at a gala ceremony that was held over the weekend in the Vietnamese capital of Ho Chi Minh City. In order to win the much-coveted beauty pageant, the 20-year-old girl had to compete with as many as 17 other contestants hailing from different countries across the globe with each one of them giving their best shot to win the title. However, on Saturday when the main event was held, stars were shining bright for Nicole Faria as the ravishing beauty was able to beat all of her competitors and emerge triumphant.

Much before the final round of the beauty contest was held, Nicole Faria was already considered to be a front-runner to win this year’s title of Miss Earth 2010. One of the major highlights of her stint in the beauty pageant was a sizzling belly dance that she performed which blended Oriental as well as Middle Eastern dancing styles that enabled her to accentuate her fan base and made her a name to reckon with in the beauty contest. The 20-year-old Bangalore girl who chose to go with a white gown with Swarovski crystals for the main event of the pageant, as expected was thrilled and overjoyed when she was announced as the winner of Miss Earth 2010.

While talking to a reputed news source following her victory in the beauty pageant, an immensely delighted Nicole Faria gushed, “I’m ecstatic! while adding that winning the contest amongst such talented contestants indeed made her feel wonderful.