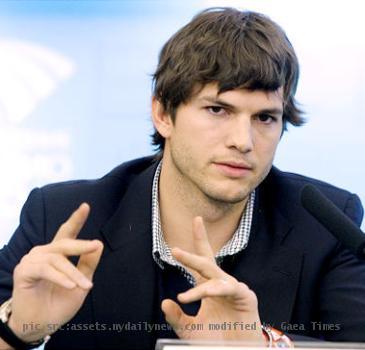 LOS ANGELES (GaeaTimes.com)- Ashton Kutcher’s lawyers have threatened legal actions against the officials of an adult film company as the actor’s name is being used to promote a sex-tape featuring his rumored mistress Brittney Jones. It has been reported that Vivid Entertainment is about to release a new video on December 14 and the company is using Ashton Kutcher’s name to gain publicity and commercial business.

The name of the sex-tape is “Brittney Jones Confidential” and in the press release, the porn mogul has declared that Ashton Kutcher’s fans will enjoy the “exclusive video” as the star might have experienced the same. However, Ashton Kutcher’s attorneys have claimed that the press release completely infringes on the marketable charity of the identity value and they would take legal actions if Ashton Kutcher’s name is not removed from the publicity campaign. Steve Hirsch, the founder of Vivid Entertainment said that he has received the letter which has been forwarded to his attorney and his attorney would reply on behalf of the company.

Gossip sites were abuzz with the news on September that Ashton Kutcher has sex with Brittney Jones when his wife Demi Moore was out-of-town. However, Ashton Kutcher and Demi Moore rubbished all the rumors. Ashton Kutcher, reportedly, said that Brittney Jones wanted attention and free publicity from the media and hence she spread all these rumors. Robert D. Offer, Ashton Kutcher’s attorney also said that Vivid Entertainment is trading on his client’s reputation for its own personal use and advantage. Robert D. Offer said that his client is entitled to recover all the damages that the press release has caused. Sources claim that the video features explicit and inhibited sex-scenes between Brittney Jones and her ex-boyfriend.

Baylor the Big 12 preseason pickDALLAS — Baylor has been picked by Big 12 coaches as the favorite ...

LONDON - Four women from Australia have smashed the world record for the fastest relay race in stile...

NEW YORK - Britney Spears has surprised her fans with photos of Heather Morris dressed as her for 'B...

LONDON - Ashton Kutcher's alleged lover who accused the actor of cheating on his wife Demi Moore...

LOS ANGELES (GaeaTimes.com)- His last release 'Killer' may not have turned out a blockbuster...

ASHTON KUTCHER's lawyer has been quick to dismiss a new tabloid expose, in which a pretty 21 yea...

Gay upsets Bolt in 100 meters in StockholmSTOCKHOLM — It turns out Usain Bolt can be beaten. From ...
Copyright© 2010 The Gaea Times