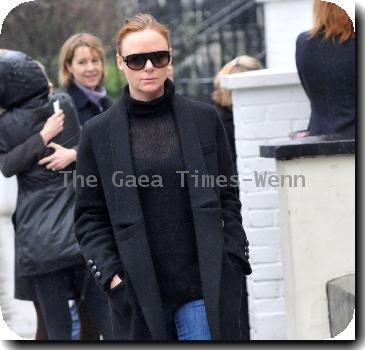 LONDON, UNITED KINGDOM (GaeaTimes.com)- Celebrity designer Stella McCartney has welcomed her own Christmas gift into the house as she gave birth to a baby daughter last week. A representative of the star confirmed the news to the media and said that Reiley (as she has been named) weighed a healthy 8 pounds at the time of birth. This was the fourth child of Stella McCartney, the famous daughter of Paul McCartney.

Alasdhair Willis and Stella McCartney have been married since 2003 and the couple already have three children. Their eldest son is Miller, who is 5 and the youngest one is 2 year old Becket. They also have a daughter named Bailey who is 3 years old. The news has come as a bit of a surprise for the fans of the celebrated designer as she said in an interview back in February that though she is excited at the prospect of more kids, she would not mind taking a break from having babies. Reports indicate that the couple is overjoyed with the latest addition to the family.

Stella McCartney was recently in the news for launching a new and more affordable line of clothes which was inspired by her large family. She had revealed that she wanted the collection to be ‘timeless’. She said that she found it wrong that children’s clothing should be expensive only because it was a designer brand. She also said that she wanted to make the clothes of such quality and standard that they could be passed down to generations. Reiley also becomes the seventh grandchild of Beatles legend Paul McCartney.

Bundchen to be new face of Balenciaga

LONDON - Brazilian supermodel Gisele Bundchen is set to be the new face of Balenciaga's summer wear ...

LONDON - English actress Carey Mulligan has beaten Victoria Beckham and Kate Moss to be named the be...

Kate Moss to be face of Dior's new beauty campaign

LONDON - Supermodel Kate Moss will be the new face of Christian Dior's beauty campaign. The Bri...

Matt Damon blessed with a baby girl - yet again

LONDON - Hollywood actor Matt Damon and his wife Luciana Barroso have a new addition to their brood....

NEW DELHI - The following are results on the sixth day of the Commonwealth Games here Saturday. ...
Copyright© 2010 The Gaea Times