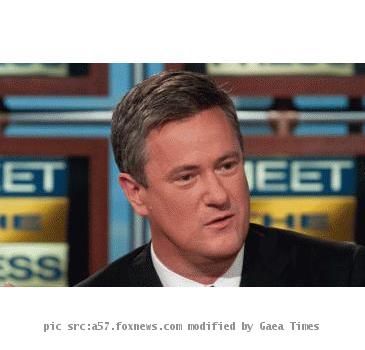 NEW YORK (GaeaTimes.com)- MSNBC’s “Morning Joe” host Joe Scarborough has been suspended for two days by officials of the cable network. The media outlets reported that the suspension came just after he admitted that he had made some political donations while he was serving the network. A source close to MSNBC said that Joe Scarborough was suspended because he did not get prior permission from the cable network while doing the political campaign.

MSNBC officials said that it is the rule of the cable network that before giving any political donation or running a campaign the employees will have to take permission from the cable network and Joe Scarborough failed to do so. MSNBC President Phil Griffin released a statement mentioning that Joe Scarborough made donations eight times of $500 each to the local candidates between 2004 and 2008 in Florida. The president said that Joe Scarborough’s suspension would end on Wednesday. Joe Scarborough released an official statement after his suspension where he maintained that he recognizes that he has a “responsibility” towards his network and he should honor the conditions and “guidelines” of his employment. He mentioned that he regrets the fact that he failed to abide by the guidelines of the cable network.

DETROIT (GaeaTimes.com)- The Main Card Lightweight bout yesterday in Detroit was rather a hear...

Obama would be 'in good shape' against Palin in potential 2012 Prez race: Biden

WASHINGTON - A 300 feet long wind tunnel that is the largest of its type in the world is situated at...