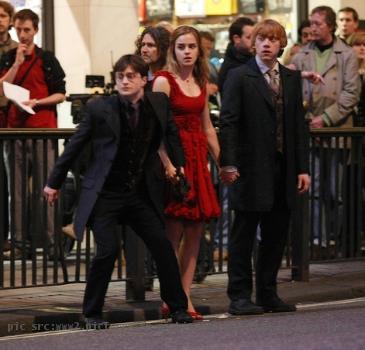 LOS ANGELES (GaeaTimes.com)- The latest film in the famous Harry Potter franchisee aka “Harry Potter and the Deathly Hallows: Part 1” has lived up to the expectations of the critics and fans, as is evident from the post release response it has been getting. The film is doing extremely well at the box office in USA and other countries and it can be safely said that it is poised to become one of the smash hits of the year. The midnight screening has resulted in a collection of $24 million which is an impressive figure by all means. However, the Potter mania has not been able to help the film cross the boundary set by “The Twilight Saga: Eclipse”. The werewolf and vampire saga fetched $30 million on opening day. It even fell short of the opening day collection of the second film in the Twilight saga named “The Twilight Saga: New Moon”. The film had grossed $26.3 million on its opening night in 2009.

However, it would be wrong to dismiss the success of the newly released “Harry Potter and the Deathly Hallows: Part 1” as it has become the biggest opening day grossing movie in the franchisee. Warner Brother is optimistic about the business prospects of the latest ‘Harry Potter’ movie and thinks it will break opening weekend collection of many movies.

“Harry Potter and the Deathly Hallows: Part 1” is going to eat into the business of the other movies at the box office. Most likely it will dethrone Dreamworks’s animated flick ‘Megamind’ from the top spot. The other two movies ‘Due Date’ and the Denzel Washington starrer ‘Unstoppable’ is also likely to be affected by the Potter mania.