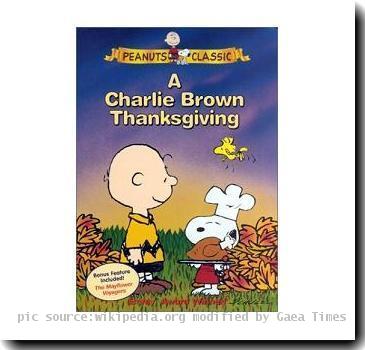 LOS ANGELES (GaeaTimes.com)- Just a week to go and the Americans will celebrate the most awaited day of the year, Thanksgiving Day. Where a section of people are still pondering over how they would make this day special for their near and dear ones, another group has solved the problem. ABC Network definitely belongs to the second group. In fact, it revised the spirit of Thanksgiving a week ahead, by airing the special show, “Charlie Brown Thanksgiving”, yesterday at 8 PM.

This popular animated series has made its marks for two generations and entertained the young audiences since 1973. Charles Schulz decided to make the day special for his audiences, who have regarded the show as one of the leading Animated series in America. Therefore, it was aired a week before the actual Thankgiving Day. However, that does not mean that there would be no excitement in the channel on November 25. “Charlie Brown Thanksgiving” is supposed to be aired once again on the same channel on the Thanks Giving Day at 8:00 PM ET/PT. In addition to that, the channel has decided to give some extra dose of gratitude with “This Is America, Charlie Brown: The Mayflower Voyagers”, along with “Charlie Brown Thanksgiving”. Although the former is not as impressive and popular as the former one, it does not mean that people would not watch it. After all, no children can avoid the temptation of “comic strip Peanuts”, that was popularized through “Charlie Brown Thanksgiving”.

“Charlie Brown Thanksgiving” has been airing since 1973, but by no means it could curtail its popularity. It won the Emmy Award, right in the following year of its original airing. Since 2007, ABC took the decision of airing this show in November every year, as this is one of the most well received shows, that is centered around the idea of Thanksgiving.