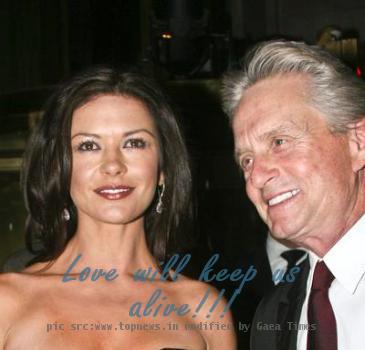 LOS ANGELES (GaeaTimes.com) — Even after fighting with the deadly cancer for over one year, 66 year old Michael Douglas is still enjoying every moment of his life with his wife Cathrine Zeta-Jones and their children.

The couple celebrated today their 10-year marriage anniversary today as their romance is continuing to blossom with each passing day. The pair have two children together; ten-year-old Dylan Michael and seven-year-old Carys Zeta. The family have recently been coping with Michael’s treatment for a cancerous tumor. The talented star has completed an eight-week course of chemotherapy and radiotherapy and is thought to be on the mend, although it will be a while before he’s fully recovered.

But that didn’t stop Michael from appreciating how lucky he was to get Cathrine as a wife. According to him-

I got struck down. I was bowled over by Catherine and when I discovered she loved golf, I realised my fantasies had come true.

He also admitted that he’s been happy to take a back seat from Hollywood in recent years, preferring to leave Catherine in the limelight as her career goes from strength to strength.

In fact, Douglas was spending so much time with the kids that his son actually thought he was a professional pancake maker. In an interview Cathrine had said-

Once we were trying to explain to Dylan that we make movies and he went to Michael, ‘Hang on. Mama makes movies, you make pancakes’

Despite of severe hardship in their relationship because of Michael’s health issue, love is still very much flourishing between the star couple. We wish them all the happiness in the coming years and hope Michael makes a quick recovery. Feel free to comment on this article. We would definitely like to know what are your thoughts on this star couple.