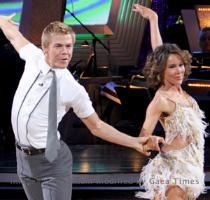 LOS ANGELES (GaeaTimes.com)- It is finally down to the top three in season 11 of ‘DWTS‘ (Dancing With The Stars) and several fans have shown disappointment with the names who have made it so far. Competing for the honors in the finale will be Bristol Palin, Jennifer Grey and Kyle Massey. Fans of the celebrity dance competition have taken to the web to express some of their hopes and disappointment about the names who did not make it so far and those who will be competing.

Many felt that Jennifer Grey is one of the contestants who deserved to make it to the top 3 of ‘DWTS‘. Keeping aside her injury and back-story, she has danced her way into American hearts over the weeks leading up to the semi-final. Not many expected her to be eliminated on Tuesday. Kyle Massey’s entry into the top 3 has also been a rather expected entry. His fierce competitiveness and entertaining dance moves earned him the tag of the show’s most enjoyable dancer to watch. The biggest shock for the fans, however, came in the form of the latest elimination that saw one of the most promising dancers, Brandy, leave the show.

The third entry into the top 3 is, therefore, is Bristol Palin. Being one of the most talked about contestants on the show and landing at the bottom of the table 4 times in the season, Bristol Palin’s entry into the top 3 has sparked yet another debate about the authenticity of the voting system on ‘DWTS‘. Backstage, after the elimination Brandy expressed shock and disappointment at the result and said that she was pinning her hopes on Kyle Massey for a win this season.

WASHINGTON - Bristol Palin has teamed up with fellow 'Dancing With The Stars' contestant Mike 'T...

Bristol Palin and her 'DWTS' partner 'get flirty' on sets!

NEW YORK - Rumours are abuzz about a budding romance between Bristol Palin and her "Dancing Wit...

Rick Fox �Dancing with the Stars� contestant arriving at a rehearsal studio wearing a sui...
Copyright© 2010 The Gaea Times