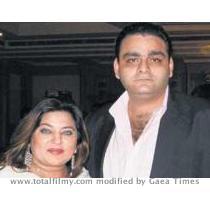 MUMBAI, INDIA (GaeaTimes.com)- Dolly Bindra might be one of the main reasons for the drama inside the ‘Bigg Boss 4′ house but the man with whom she shares her real life home prefers not to watch the show at all. Kaizaad Kermani, the man who is married to the most talked about contestant in ‘Bigg Boss 4′, said that he prefers to keep himself away from the drama and gets updates about the show via emails and other people.

Kaizaad Kermani said that recently he has been spending a lot of time in Malaysia. He owns a Bollywood event management company and said that he and his wife are quite close to the show host, Salman Khan. Dolly Bindra’s husband claimed that if he needs any immediate updates from the show, he gets it from the ‘Dabangg’ star himself. About the show he said that like the rest of the contestants, Dolly Bindra is also playing for money. He added that the show is like a game and like any other game which is played for money, the stakes are high and the contestants have to go all out.

Dolly Bindra’s husband, Kaizaad Kermani, said that the decision to take part in Bigg Boss was taken entirely by his wife. He also said that the ongoing drama was expected when 10-12 strangers are kept under one roof without the option of stepping out. The businessman explained that apart from Khali, the rest of the house mates were chosen because they have a certain reputation. Dolly Bindra has been in and out of the news since her entry into the house as she was seen getting into ugly verbal battles with several of the other contestants of the show.

NEW DELHI - Loud-mouthed and violent Dolly Bindra and the usually reticent Sameer Soni have been thr...
Copyright© 2010 The Gaea Times