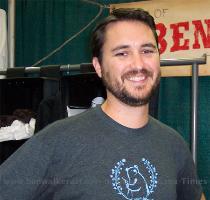 LOS ANGELES (GaeaTimes.com)- Wil Wheaton returned to ‘Big Bang Theory’ in the latest episode titled ‘21-second Excitement’. The much anticipated episode showed the regulars of the cast heading for a show of ‘Raiders of the Lost Ark’ before encountering Sheldon’s nemesis. Wil Wheaton has reprized his role as the ‘Evil Wil Wheaton’ on the show and the fans of the show have already taken to the web to debate the consequences of the strong character on the series.

Wil Wheaton plays the perfect antagonist to Sheldon on the show and earlier contests between the two have resulted in some seriously interesting sitcom entertainment. Since his debut in Season 3, Wil Wheaton has been one of the strongest enemies of Sheldon on the show. Jim Parsons, who plays Sheldon in the series said that the return of his arch rival ensures that the character of Sheldon will have some serious competition in the episodes ahead. He explained that if Wil Wheaton could not outdo him there was no point in bringing back the character. He also said that Wil Wheaton is such a great guy in real life that it makes sense when Sheldon fights the character passionately.

Wil Wheaton told the media that playing the evil caricature of himself on ‘Big Bang Theory’ provided a new lease of life to his career. He also revealed that he felt fortunate to be a full time actor and felt that he was a part of a family that was scattered throughout the entertainment industry. He also joked that if other stars from ‘Star Trek: Next Generation’ wanted to join the cast, they would have to get him some great gifts.

LAHORE - Unprecedented corruption and the price-hike have become top concerns of the people of Pakis...

WELLINGTON - A man in New Zealand has been jailed after he posted a photograph of his naked ex-girl...

CHANDIGARH - In a pre-Diwali bonanza for mayors, councillors and other senior functionaries of munic...

Contempt of court only arises on disobedience of order: Apex court

NEW DELHI - The Supreme Court has held that the proceedings against a person accused of contempt of ...

Reid, Angle stay tied in race for US SenateLAS VEGAS — A barrage of attack ads from both sides has...
Copyright© 2010 The Gaea Times