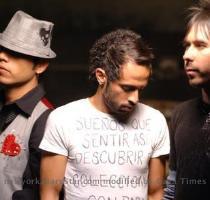 LAS VEGAS (GaeaTimes.com)- Latin music fans all over the world celebrated the biggest night in Latin music on Thursday at Las Vegas with the Latin Grammys 2010. The special night was hosted by Eugenio Derbez and Lucero and there were some stellar performances by some of the biggest international Latino stars. The Latin Grammys recognize music from all over the world that is recorded in Spanish or Portuguese.

Mexican trio Camila was among the early winners of the night with the Record of the Year and Best Pop Album award. Dominican sensation Juan Luis Guerra also bagged a couple of awards in the Latin Grammys 2010 and gave a stunning performance as well. The star studded affair also had pop icon Ricky Martin presenting the Latin Recording Academy’s Person of the Year award to Spanish icon Placido Domingo who was recognized by the Grammy for his music as well as his philanthropic endeavors. The singer is the only remaining member of the Three Tenors that earlier included Luciano Pavarotti and Jose Carreras.

The Latin Grammys 2010 also awarded Gustavo Cerati who is presently in coma. The Argentinian star picked up the best rock album and song on the big night. bagging the highly coveted award for the best urban music album was the Venezuelan reggaeton sensation Chino y Nacho. The performers included international Latin sensation Enrique Iglesias and Marc Anthony. The later also sizzled on the red carpet of the event with his wife Jennifer Lopez who wore a skin fit low cut brown dress for the gala event.

MUMBAI - Mahindra Satyam, which was delisted from the New York Stock Exchange in September, said Mon...

WASHINGTON - India has topped the list of top ten nations that lacks sanitary facilities. In an i...

LONDON - Reports are abuzz that footballer Nobby Solano is using his nifty footwork to give dancing ...