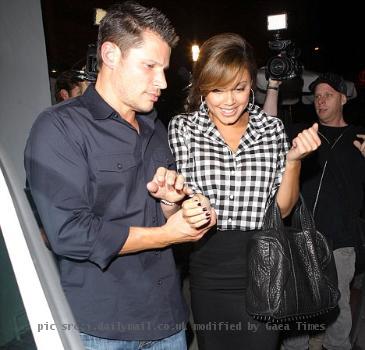 LOS ANGELES (GaeaTimes.com)- Wedding bells are again ringing for singer Nick Lachey. After his much publicized split from pop singer Jessica Simpson, the noted musical artist is once again going to walk down the aisle, this time with his longtime girlfriend well-known television personality Vanessa Minnillo. The news that couple have taken the decision to tie the knot has been confirmed by them through a statement that they have released announcing their engagement.

In the statement that pair expressed their excitement and happiness about their engagement while it is also reiterated that the couple are really looking forward to spend the rest of lives with each other. Moreover, the former 98 Degrees star also validated the news of his engagement through his profile in the micro-blogging site Twitter in which he revealed that while he popped the question to Vanessa Minnillo, he went down on his knees while he jokingly added that, “I do a lot of squats so my knees are very strong.” An insider close to Nick Lachey and the 30-year-old television personality has divulged to the media that they both are highly thrilled and happy at the prospect of their impending marital nuptials.

Prior to his relationship with Vanessa Minnillo, Nick Lachey is known to have been married to pop star Jessica Simpson with whom he tied the knot in the year 2002. However, their married life was on the rocks just few years later and in 2006, Jessica Simpson filed for divorce citing irreconcilable differences. Following his split from the “I Wanna Love You Forever” singer, Nick Lachey started dating Vanessa Minnillo.

LONDON - Model-actress Elizabeth Hurley has a fan in her eight-year-old son Damian. His favourite fi...

MUMBAI - The third edition Of Rendez-Vous With French Cinema In India is set to begin here Dec 4 and...

LOS ANGELES - Singer Nick Lachey is happy to learn about his ex-wife Jessica Simpson's engagement an...

NEW YORK - American model Jessica White was left flustered before the casting call for the Vi...

MELBOURNE - Newly crowned Miss World 2010 Alexandria Mills from US has landed in a scandal after nak...