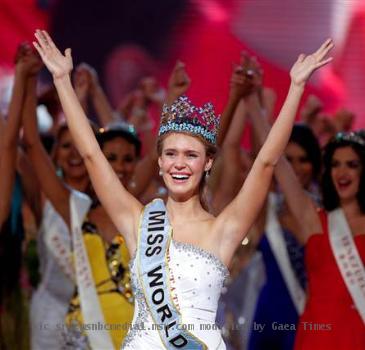 SANYA, CHINA (GaeaTimes.com)- This was a night that Miss USA Alexandria Mills is likely to remember all her life. The Miss World journey of the 18-year-old beauty queen could not have concluded in a better way as the American teen took home the much-coveted Miss World title in the grand beauty pageant that was held on Saturday evening in the city of Sanya in China. The Miss World beauty pageant which took place in the Chinese city last night reached its 60th year this time and like every previous occasion, even the latest event was a huge success.

Despite the fact that Alexandria Mills was not presumed to be one of the front-runners to win the beauty pageant and expectations were much high from a number of other contestants, the American teen gave her best shot and ultimately was able to win the title. The victory was surely a dream come true for the 18-year-old who was emotionally overwhelmed when her name was announced as the winner of Miss World 2010 and was later crowned by last year’s winner Miss World Kaiane Aldorino from Gibraltar. With Alexandria Mills winning this year’s Miss World beauty pageant, the second runner-up was Emma Wareus of Botswana while Venezuelan beauty Adriana Vasini registered the third slot.

Alexandria Mills was looking dazzling in an ivory white full-length gown that she chose to wear for last night’s main event of Miss World 2010. Around 114 contestants from all around the globe participated in the Miss World beauty competition that was held in China this year. The host nation’s own contestant Tang Xiao also bagged a spot among the top five contestants.