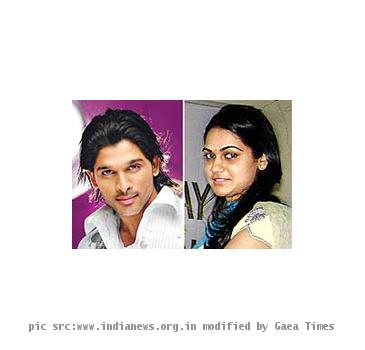 HYDERABAD, INDIA (GaeaTimes.com)- Telugu superstar Allu Arjun is all set to break millions of hearts of his female fans as rumors has it that the noted actor is gearing up to tie the knot. If that leaves you wondering that who is the lucky girl, it is Hyderabad girl Sneha Reddy with whom the actor has supposedly been romantically involved for some time now. According to reports, the couple took the decision to tie the knot after dating each other for the past few months. Although the news that Allu Arjun is all set to get engaged has created quite a buzz among his large number of fans, no official confirmation has been available in this regard as yet.

Sources say that the family of both the 27-year-old actor and the Sneha Reddy are in talks with each other about the marital nuptials between the pair although supposedly a decision has not been reached by the two families as yet. Reports claim that although Allu Arjun’s family haven given their consent to the matrimony, the Reddy family is yet to give its nod to the union. Sneha Reddy’s father has reportedly revealed to the media that as of now, its just too premature to discuss about the marriage as a decision by the two families is yet to be taken.

While Allu Arjun is one of the most popular actor’s of the Telugu film industry, his girlfriend Sneha Reddy is doing her MS in the United States. The Hyderabad girl is the daughter of noted educationist K C Sekhar Reddy, who is the founder of a reputed engineering college in the state.