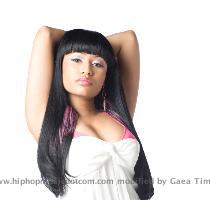 LOS ANGELES (GaeaTimes.com)- R&B sensation Nicki Minaj her latest video ‘Right Thru Me’ premiered this Wednesday. The video has already started making waves on the web as fans get an insight into the other side of the boisterous singer’s personality in the song. Nicki Minaj has donned a whole new avatar in the video which showcases her disturbed relationship with her beau. In the video Nicki Minaj is seen for the first time without her usual make-up and her signature wacky attire.

The first frame of the ‘Right Thru Me‘ video shows Nicki Minaj get into a heated argument with her lover. The man threatens to leave the singer and she is seen breaking a glass in anger. Later we see Nicki Minaj trying to make up for her behavior and cuddling the man. In between the shots that show the dynamics of the relationship, Nicki Minaj is also seen behind a glass wall in a room full of steam. She is seen wiping off the water droplets from the glass and singing. Though unclear due to the steamy room, it is evident that Nicki Minaj is in her bare essentials inside the room. There are also some dark steamy scenes shown between her and the lover.

The ‘Right Thru Me‘ video is a part of Nicki Minaj’s latest album called ‘Pink Friday’ that is slated to release in late November. Nicki Minaj also debuted another single one day ago on Tuesday called ‘Check It Out’ where she was more herself with the funky hairdo and the futuristic clothes. The singer was also in the news earlier this week after she tweeted her thanks for a concert at Washington DC and then asked her fans to send her photos of the women’s cleavages where she signed autographs.