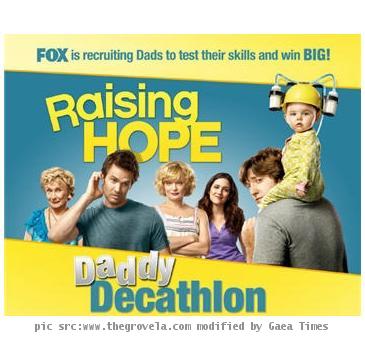 LOS ANGELES (GaeaTimes.com) — Fox has just kicked off with its new comedy sitcom “Raising Hope” on Tuesday night at 9pm. The new series takes you on a fun ride and promises to be another hit delivered by writer-producer Greg Garcia after “My Name Is Earl”.

The series is a half-hour comedy that narrates the story of a dysfunctional family and their turmoil when an unexpected member comes in the family in the form of a newborn child. The first episode is nicely exaggerated when a 23 year old guy, played by Lucas Neff lands up with his daughter at his home after he had a romantic one-night stand with a girl. The too young father is thrown to raise his daughter amidst all odds. It shows the endearing journey of the poor boy and his family to raise the baby, to take care of the family and the same time find time for your love.

Raising hope raises your spirit but in a grungy and a lousy way. The series is so made to draw viewers attention as it surrounds around the theme of simple challenges faced by almost 90% American families every day. The comedy show is lighted up by the excellent performances of the guy’s parents played by Garret Dillahunt and the wonderful Martha Plimpton. Cloris Leachman plays the character of the boy’s grandmother. Are you interested to watch this show? Do you think that this comedy show will be a major hit in Fox? Don’t forget to write to us.