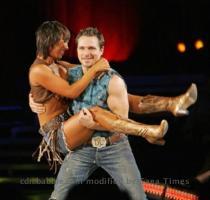 LOS ANGELES, (GaeaTimes.com)- Yesterday night “Dancing With The Stars” recalled the top ten dance performances in the history of the show that made created a mark on the viewers. They picked ten best performances in “Dancing With The stars” right from its season one, aired on June 1, 2005 till season 11, which will conclude on November 23, 2010. Drew Lachey topped the list of those performers.

Amongst the ten best performances, the first position went to Drew Lachey and his partner Cheryl Burke. Celebrity dad Drew Lachey, performed the free-style dance with the rocking country number, “Save a Horse Ride a Cowboy” by the country duo Big & Rich, in season 2 on February 23, 2006. Argentine tango performance by Gilles Marini and Charyl Burke, of season 8, got the second position in the list. Going by the Top 10 Scoring Couples by Averages, Gilles Marini and Charyl Burke, of season 8, gets an average score of 28.1 and stands second in this list too followed by Drew Lachey and Cheryl Burke’s pairing in season 2, scored and average of 27.7, which gives them the third rank in the list. Therefore, it may be concluded that with Cheryl Burke as the common factor, both Drew Lachey and Gilles Marini , may be regarded as two of the best dancers in all the eleven seasons.

The freestyle performance of Drew Lachey, with “Save a Horse Ride a Cowboy” was performed on the eighth week of season two and it earned them a total of 30 with a 10 from each judge. Gilles Marini and Charyl Burke also got a 30, on the week for the Argentine performance in season 8, although, he was tied with Shawn Johnson.