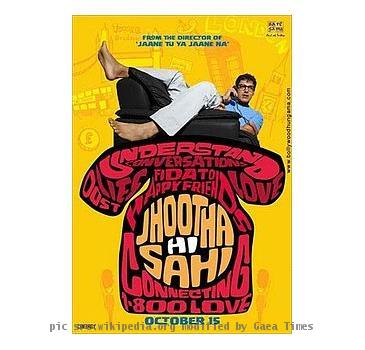 MUMBAI, INDIA (GaeaTimes.com)- Bollywood hunk John Abraham’s latest flick “Jhootha Hi Sahi” hits theaters across the country today. The anticipation among the audiences about the movie is all the more as it has been directed by Abbas Tyrewala who’s last offering “Jaane Tu Ya Jaane Na” was successful in winning wide accolades among the movie-goers and turned out to a major box-office hit. Even the director’s latest flick “Jhootha Hi Sahi” is another peppy romantic movie that has already created quite a buzz among the audiences prior to its release.

The Abbas Tyrewala directed movie is set entirely in London and it tells the tale of a nerdy book store owner Sid played by John Abraham. The story takes an interesting turn when John Abraham’s character meets up with a suicidal woman Mishka after his phone number is mistakenly printed on a helpline and gradually the two get close as the Sid attempts to help the girl in turn falls in love with her. The reviews that “Jhootha Hi Sahi” has received till now has mostly been mixed with many critics slamming the movie as another run-of-the-mill Bollywood movie with a predictable storyline.

Apart from starring John Abraham, “Jhootha Hi Sahi” has generated hype among the youth as it marks the acting debut of television producer Raghu Ram, who is best known for being associated with the MTV reality series “Roadies.” While Abbas Tyrewala’s wife Pakhi stars as the leading lady, Madhavan and Nandana Sen would also be seen making guest appearances. The melodious music by A.R. Rahman is also being appreciated by the audiences.