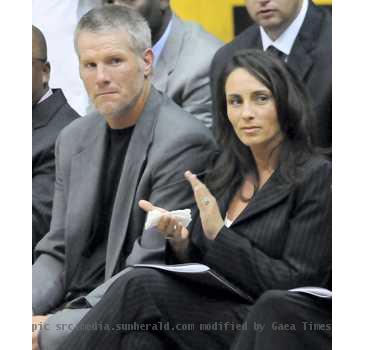 LOS ANGELES (GaeaTimes.com)- Deanna Favre, Minnesota Vikings Brett Favre’s wife appeared on ABC’s “Good Morning America” on Thursday where she talked about the allegations that her husband is facing lately. A website earlier on reported that the star quarterback was responsible of sending vulgar messages and pictures to an ex-New York Jets game day presenter Jenn Sterger and subsequently an investigation has been launched into the allegations by the National Football League.

While speaking on “Good Morning America,” Deanna Favre revealed that she is turning to religion in order to overcome the allegation her star quarterback husband is facing. Although Deanna Favre said that she was relying in faith to not get affected by the allegations, the 41-year-old NFL player’s wife did not directly speak about the claims while neither accepting nor denying it. Deanna Favre was on the popular ABC show promote her new book ‘The Cure for the Chronic Life: Overcoming the Hopelessness That Holds You Back’ but when asked about the allegations, she only said that she was a ‘woman of faith’ who hoped to come out of the situation by resorting to religion. Meanwhile, ABC officials have stated that Deanna Favre had given her consent to appear on the show before the controversy emerged but later did not want to cancel it as the main theme of her book was to overcome struggles.

Deanna Favre tied the knot with star NFL quarterback in the year 1996 after years of romance. Although their relationship had to go through many difficult phases, they have been married for 14 years with two children, Brittany, 21 and 11-year-old Breleigh.