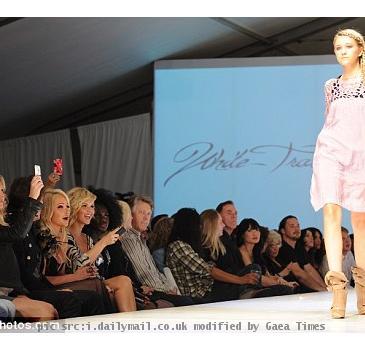 LOS ANGELES (GaeaTimes.com)- It seems that the celebrity children are making headlines now a days. Just few days back Will Smith and Jada Pinkett Smith’s daughter Willow Smith’s “Whip My Hair” went viral online, its time for Ava Sambora, the 13 year old daughter of Heather Locklear and Richie Sambora to attract attention. Ava Sambora walked the runway last Sunday showcasing the new collection of her father’s line White Trash Beautiful. The audience cheered for her as she walked the stage with confidence and looked beautiful in her dresses.

Richie Sambora said that Ava Sambora is funny, smart and “gregarious” and she has made him a proud father. The 13 year old model told in her interview that she loves Miley Cyrus and would like to act with her in future. She said that Miley Cyrus is her biggest role model apart from her father. Ava Sambora also said that she loves Justin Bieber and his fan and she feels Justin Bieber is the sexiest man alive.