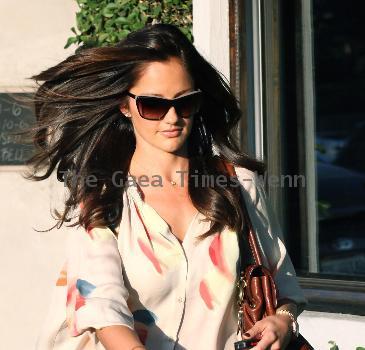 LOS ANGELES (GaeaTimes.com)- It is time for the guys to turn their attention to Minka Kelly as the actress has been named the ‘Sexiest Woman Alive‘ by a reputed magazine. Minka Kelly, who is also the famous girlfriend of New York Yankee Derek Jeter, has recently carved her niche in Hollywood for her stunning looks. The actress recently said that she is very proud to be a woman and is cool with all her flaws. The guys will find it hard to find any flaws in the 30 year old, but the bombshell revealed that she had rather unconventional childhood. She explained that her mother was an exotic dancer and stripper and would come home in the wee hours of the morning and then they would go out grocery shopping.

Minka Kelly also said that she is happy to have crossed her twenties and feels that she is ageing gracefully. She explained that the 20s had a lot of decisions to be made and a lot of struggle in terms of career and other things. Minka Kelly also posed for some sexy photos for the magazine that named her the ‘Sexiest Woman Alive‘. In one of the provocative photos for the magazine, Minka Kelly is seen posing in front of a mirror in a white lingerie with frills. The photo shows off her curves and proves that she also has one of the best toned bodies in the entertainment industry today.

Minka Kelly, the ‘Sexiest Woman Alive’ and Derek Jeter have been dating for the last two years. Though there were rumors recently of the couple being married, none of the parties have commented on the matter.