“Strangers On A Train” Will Meet Again 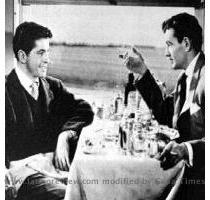 LOS ANGELES (GaeaTimes.com)- The memorable black and white classic flick, “Strangers On A Train“, will inspire the production of yet another film, based on almost the same storyline. This time, BBC Films and Slingshot Productions, will draw inspiration from the old classic to create a new thriller, “Teens On A Train”. The original film was directed by Alfred Hitchcock. It was adapted from the best seller novel by Patricia Highsmith.

“Strangers On A Train” was produced by Warner Brothers and released in 1951. It starred well known actors like Farley Granger, Ruth Roman, Robert Walker, Leo G. Carroll, Patricia Hitchcock and Laura Elliott. The same novel was also adapted into a theater play almost the same year. Needless to say, all the forms of “Strangers On A Train” were widely accepted by the audience. However, when BBC Films and Slingshot Productions decided to create “Teens On A Train”, they were sure that they did not want it to be the direct remake or the sequel of the old version. The new movie, will just take certain ideas and inspiration from it.

In “Strangers On A Train“, the two strangers meet while having lunch in their compartment. In the course of their discussions, they share their problems and decide to murder two people, who were creating troubles in each others life. In the new version, a young boy and a girl meet up in the train almost in the same way and same context, and start sharing their problems. However, the boy ends up knowing that the girl is a psychopath. “Teens On A Train” has also been inspired by another movie called, “Before Sunrise”. It has been scripted by Joshua St Johnston. Still on its pre-production stage, the shooting of the movie will start in 2011.