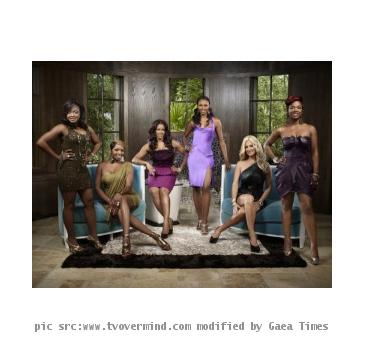 LOS ANGELES (GaeaTimes.com)- The American reality television series “The Real Housewives of Atlanta” season 3 was premiered on Bravo yesterday and the audience loved to see their favorite stars once again on the television screen. The reality series revolves around women in the Atlanta metropolitan area who balance their personal and professional lives amidst all the hardships. The third season of “The Real Housewives of Atlanta” stars fashion designer Sheree Whitfield, author NeNe Leakes, singer and wig designer Kim Zolciak, record producer/singer Kandi Burruss, fashion model Cynthia Bailey, and attorney Phaedra Parks.

“The Real Housewives of Atlanta” premiere was subtitled as “New Attitude” and it introduced all the characters of the reality series. Dwight Eubanks becomes the source of rumor as he supposedly loaned $10,000 to NeNe Leakes’ husband Gregg. When Nene hears it from Kim she confronts her husband and he says that it was not such a hefty amount. Kim Zolciak comes out and shares the news of the lesbian relationship with DJ Tracy Young to the world. Kandi Burruss is seen dating a NFL player Willis McGahee from the Baltimore Ravens and the couple goes out for rock-climbing. She tells him that she does not like long distance relationships and likes to spend more time with the person she is dating.

The audience saw Phaedra Parks much later when she says that the Southern women have the charm in them which the women of other parts of the world lack. The audience understands her pride when she admits that she is “fabulous” and “beautiful”. Phaedra Parks is married to Apollo Nida and the couple will soon experience the bliss of parenthood. With much twists and turns and introduction of all the characters “The Real Housewives of Atlanta” gave the audience ample entertainment and kept them riveted to their seats.