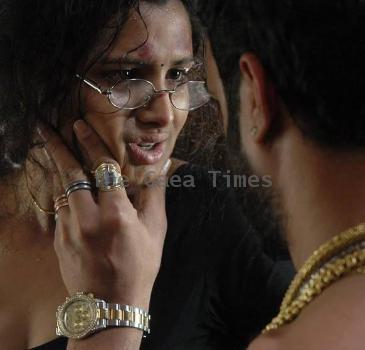 September 27, 2010 (Sampurn Wire): October is going to be a month of celebration for the Telugu film industry; this month will see some of the biggest films hit the theaters. Ram Gopal Varma’s trilingual film Rakta Charitra is all ready to be released all across India on October 22, 2010. Like all the RGV films in the past Rakta Charitra has had its own share of controversies but that has not hindered the progress of the film. Rumor has it that during the filming of the movie RGV even received death threats because of the controversial nature of the subject. The music for Rakta Charitra was launched on September 26 in Hyderabad and it became an instant hit with the audience. The music for Rakta Charitra has been composed by Mani Sharma.

Mani Sharma was introduced into the music industry by RGV who recognized his talent right away. Madhura Music has acquired the music rights for Rakta Charitra and it is pretty clear the movie is going to be a huge hit. Here is some trivia for the RGV fans; the famous director has rendered his voice for one of the tracks in the telugu version of Rakta Charitra. Most of the song sin the movie will be played in the background; the film’s score will include the famous ‘Govinda Govinda’ song from Sarkar and Sarkar raj films.

We are sure rakta Charitra will scorch the screen with its gritty storytelling on October22.

'Shah Rukh Bola..' is a film about faith: Director

HYDERABAD - A court in Andhra Pradesh Wednesday sentenced a man to life imprisonment for killing in...

Vivek Oberoi And Priyanka Alva To Tie The Knot Today

BANGALORE, INDIA (GaeaTimes.com)- Bollywood star Vivek Oberoi is all set to break the hearts of ...

In a world full of storms, Priyanka is my anchor: Vivek Oberoi

MUMBAI - Vivek Oberoi, who will tie the knot with Priyanka Alva Friday, is so much in love with his ...

MUMBAI, INDIA (GaeaTimes.com)- The much awaited film 'Rakta Charitra' made on the life and r...