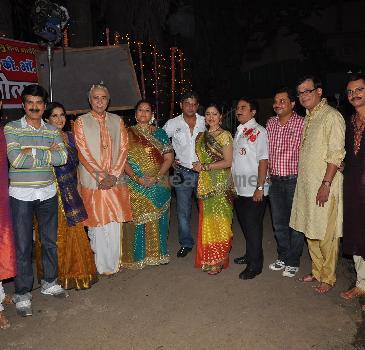 A source spoke to TellyCafe.com and informed us, “The unit members were working with a normal shoot schedule and at some point during a five minute break, Anang Desai, Supriya Pathak, Girish Sahdev along with the director Aatish Kapadia entered the sets quietly. No one recognized them as all were busy with their own shoot and the Khichdi team arrived covered with shawls to remain inconspicuous. It was our Tappu Sena who identified them and let everyone know about their presence.”

“As the director of the movie, Aatish Kapadia, is a very good friend of Dharmesh Mehta’s, the Khichdi team was present for the promotion of their movie. Later on, they joined the cast of Taarak Mehta… and witnessed the dance competition of the society,” adds the source.

We tried contacting Disha Wakani and Dilip Joshi but they both remained unavailable for their comments. Therefore, we contacted Mandar Chandwadkar who essays Mr. Bhide of the show and he was pleased to say, “Yes, it was a nice surprise for us to see the Khichdi team on our sets. It was great fun to see the characters Hansa, Praful, Babuji, Himanshu. They are all rocking characters. It was a nice experience altogether.”

It would be really a roller coaster ride to see the two ever best comedy shows joining their hands.