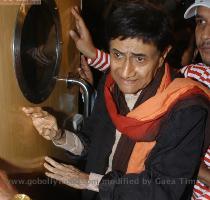 MUMBAI, INDIA (GaeaTimes.com)- The evergreen romantic hero of Indian cinema Dev Anand is turning 87 today and the birthday of the charismatic star is going to be celebrated by his fans with much elan all over the country.

In the 1950s and 1960s, Dev Anand acted in a number of romantic films which struck gold at the box office and made him a heart-throb of millions. He has also dabbled with film direction and production in his long career. His brothers Vijay Anand and Chetan Anand also directed a number of films. The ‘Jewel Thief’ actor is known for his inimitable style and suave image that was not seen in any other actor of his time. He was close to stalwart actors like Ashok Kumar and Guru Dutt and worked with them in some of the most memorable films of Bollywood. Dev Anand tried playing different roles in his carer in films such as “Baazi” and “Jaal” in the 1950s.

He also won a number of coveted awards for his performance in a number of hit films in his career. He was reportedly involved with actress Suriaya and they worked in several films together. His films like ‘Johnny Mera Naam’, ‘Guide’ and ‘Hare Rama Hare Krishna’ were major hits. The last one launched the sultry actress Zeenat Aman in Bollywood. He gave hits even when he was in his 50s. However, after ‘Des Pardes’ which was released in 1978 none of Dev Anand’s films were successful at the box office. His autobiography which received wide acclaim was published 3 years back.

CHANDIGARH - It is one of the most prosperous states of India and produces the bulk of the country's...

NEW DELHI - The Pakistan Government has so far not been able to acquire the land for Baba Guru Nana...

Apple seeds iOS 4.2.1 the Latest Installment of iOS 4.2 to Developers

Well this may not probably be the iOS 4.2 announcement that you were eager to listen to, but no ...
Copyright© 2010 The Gaea Times