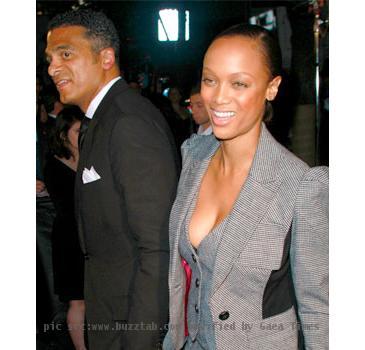 NEW YORK (GaeaTimes.com)- ‘Wall Street : Money Never Sleeps’, the much awaited movie was premiered at New York this week and the event as expected was a truly star studded affair. The premier and Red Carpet was covered by the reputed media entities and TV networks. The stars of the movie, Shia Labeouf and Michael Douglas were seen there. However, they were not the only ones who stole the limelight. Supermodel Tyra Banks attended the premiere of the movie and she was her usual gorgeous self. The model was not alone at the premiere and she was accompanied by her boyfriend John Utendahl. Incidentally John Utendahl is a well known banker and he owns the famous Utendahl Group, one of the biggest investment entities in the USA. The banker is known for keeping a low profile and he does not attend the showbiz events much. The duo were at ease and they appeared the perfect couple at the film’s premiere.

John Utendahl is known to be seeing model Tyra Banks for quite some time. Last year it was rumored that the couple had got engaged secretly though the lady refuted the rumors. The model said in an interview in recent times that she does not prefer attending such Red Carpets and showbiz events much. However, it looks like that she and her boyfriend could not resist attending the premier of the Wall Street sequel.

John Utendahl came in hand in hand with his model girlfriend at the premiere. Needless to say, the photographers jumped into actions and their pictures made way to the web pretty soon!