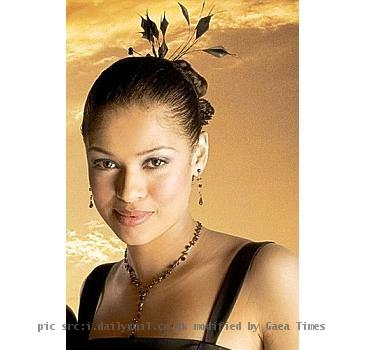 LOS ANGELES (GaeaTimes.com) — What kind of a name is this Gugu Mbatha Raw? I know this will be your reaction when you hear this name. The name may sound unfamiliar to you but the British actress associated with this name is going to be famous soon as Gugu Mbatha Raw is set to appear on her new NBC thriller series “Undercovers“.

In the action packed thriller Undercovers Gugu will cast opposite Boris Kodjoe and the series premiere will be held tonight. What can you expect from this new series that is approved by JJ Abrams? Well you can expect some freaking hot action scenes and the beautiful actress is set to create waves in this new series. This much talked about thriller is about a sexy CIA spy hot couple who have come to grounds to reactivate their profession after being retired from the agency for sometime.

Gugu Mbatha Raw as her name suggests is a pride in the television series fraternity. Let me share with you some interesting facts about her. She is a native of Oxford, England. From an early age she discovered her passion in Did you like her? Share your thoughts.

LOS ANGELES (GaeaTimes.com) -- What kind of a name is this Gugu Mbatha Raw? I know this will be ...

CHANDIGARH - A Punjabi filmmaker is trying to revive the state's traditional sport `kabaddi' and att...

Facts Of The Day (Jj Abrams)

MEKIA COX, the dancer star of MICHAEL JACKSON's THIS IS IT concert movie, has landed a leading r...

Gary Lineker introduces the 'One Goal

Gary Lineker introduces the 'One Goal Education for All' programme at Wembley Stadium, supported...
Copyright© 2010 The Gaea Times