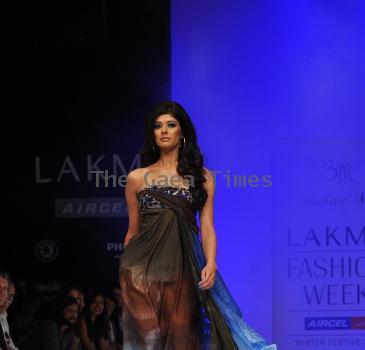 September 22, 2010 (Sampurn Wire): The second day of the Lakme fashion week started off with a bang emphasizing the fact that the new and upcoming talent of the fashion industry is here to stay. The young talents set the ramp on fire showcasing their designs without holding anything back at all.

Amalraj Sengupta wowed the audience with his very different style of garments which seemed to be taken from the archaic era that took us back to the times of the World War II. However, the extensive layering as well as the variety of fabrics held up the interest of the audience and was not morbid in the least in spite of being taken from the tumultuous years of the war. Harangad Singh, on the other hand, succeeded in captivating the viewers with the liquid fluid grace of his line of cocktail dresses presented in the darker hues of gray, maroon and rust. Black seemed to the dominant colour all throughout.

The superbly talented duo of Shrivan-Narresh proved that they were a force to reckon with in the world of fashion. Their clothes in a shimmering coral green or a vivid turquoise blue seemed to be just right for the beautiful beach wear that was showcased on the ramp. Mauve and nude bases on trousers, robes as well as corset dresses looked enchanting too. However, it was the contemporary style of draping the artfully designed sarees that held the audience spellbound making it one of the highlights of the occasion.

Babita Malkani was on next. She mesmerized the audience with her range of styles which seemed to have borrowed heavily from the mystical land of Turkey. The effects of the very Indian art of tie-and-dye along with the effective layering emphasized the flowing lines of the garments giving each of the models an alluringly oriental look. Pooja Batra turned out to be the showstopper for Babita and carried out her part with aplomb, although she had been away from the world of glamour for years now. The Chennai based designer Vivek Karunakaran presented the ‘Urban Vagabond’ theme, which had a minimalist approach.

They were followed by Shilpa, who created high drama with ensembles made of wire seen through a hazy curtain of gauze and net, leaving the audience a little disappointed. Sailex had an interesting range of evening wears to show off while the dresses in varying lengths by Vizyon revealed a distinct Grecian influence.

Filed under: Fashion, News and Gossips

LFW Summer/Resort 2011 to be held in March

MUMBAI - The Lakme Fashion Week (LFW) is all set to hold its next season - the LFW Summer/Resort 201...

MUMBAI - Most fashion weeks in India see a heavy dose of Bollywood celebrities either as showstopper...

NEW DELHI - Ever wondered why most brides end up looking like a piece of cake on their D-Day? Beauty...

September 21, 2010 (Sampurn Wire): The fashion prediction of Satya Paul at the Lakmé Fashion ...

MUMBAI - The thin presence of A-list Hindi film actors had made the Lakme Fashion Week a dull affai...
Copyright© 2010 The Gaea Times