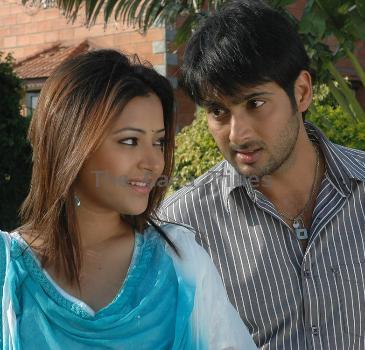 September 21, 2010 (Sampurn Wire): Udaykiran and Swetha Basu Prasad are playing the lead roles in ‘Nuvvekkadunte Nenakkadunta…’ directed by Subha Selvam, presented by P Udaykiran of UK Avenues, and jointly produced by D Kumar and Eswara Prasad on the banner of Sri Venkateswara Swamy Films. The shooting of the film was complete and post-production works are in progress. The presenter says, ‘We can proudly say that it is our subject. The climax of the film is extra-ordinary. It is basically a romantic emotional family entertainer. All the six songs in the film would be the life of the movie. Of them one is a remix song. Uday and Swetha combo is an impressive pair. Presently dubbing work is in progress. We are very confident that the film would become a big hit. We will soon launch the audio.’ Asish Vidyarthi, Amit, Brahmanandam, Dharmavarapu Subrahmanyam, Venumadhav, Raghubabu, Chitram Sreenu, Chitram Basha, Nizhalgal Ravi, Gundu Hanumanta Rao, Arthi, Nalini, Rajyalakshmi and others are in the cast. Music is by Pradeep Koneru, dialogues are by Janardhana Maharshi and Pradeeep Ch, cinematography is by N Raghava, while editing is by Nandamuri Hari.

May 12, 2010 (Sampurn Wire): The final schedule of ‘Nuvvekkadunte Nenakkadunta’ direct...