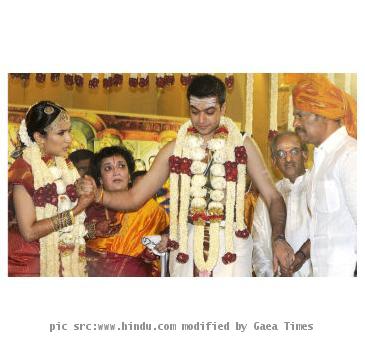 CHENNAI, INDIA (GaeaTimes.com)- This was a wedding that the city of Chennai would remember for a long time to come. Superstar Rajinikanth gave away his younger daughter Soundarya in a lavish wedding on Friday that was attended by the who’s who of the world of entertainment as well as politics. Rajinikanth’s daughter Soundarya tied the knot with Chennai entrepreneur, Ashwin Kumar at a gala wedding ceremony with a galaxy of stars gracing the event to offer their best wishes to the newly-married couple.

The wedding rituals began as early as 7.00 in the morning at the Rani Meyyammai Hall following the traditional Tamil Brahmin style with Rajinikanth’s daughter Soundarya looked dazzling in a sari and traditional jewelry that made her look extremely ravishing. Although it was clear that the South Indian superstar was overwhelmed with emotions while giving away his daughter to the Stanford graduate, he was extremely poised as he warmly welcomed all the guests who arrived to the wedding. Some of the prominent personalities who were present at the wedding and the reception that was held later at the evening included Union Home Minister P. Chidambaram, Tamil Nadu Chief Minister M. Karunanidhi, Union Minister A. Bala as well as a host of other dignitaries. The world of glitz and glamor was represented by Kamal Hassan, Chiranjeevi, Sridevi along with Boney Kapoor, Prabhu Deva, among others.

Rajinikanth’s daughter Soundarya has been romantically involved with entrepreneur Ashwin Kumar for about a year before they decided to tie the knot. The Tamil superstar’s daughter got engaged to the love of her life in the month of February this year.