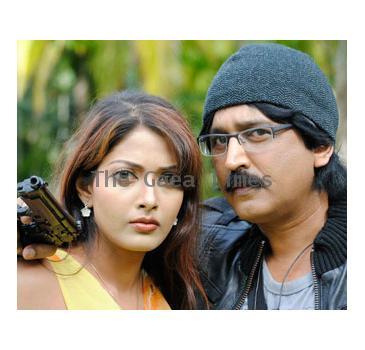 ‘Shock’ is a remake of the 1999 Bollywood suspense thriller ‘Kaun’, which was directed by Ram Gopal Varma and starred Urmila Matondkar, Manoj Bajpai and Sushant Singh. The Kannada remake will star Ramesh Aravind, who plays the psycho character and Suma Guha will essay the role played by Urmila.

The entire shooting for ‘Shock’ was completed only in nine days in a bungalow at Arasikere in Karnataka. The small budget movie also has actor Ninasam Ashwath in a vital role. The film is produced by Amarchand Jain, Mungilal Jain, Vijay Surana and Ramesh.

H.S Rajasekhar has been waiting for a long time to make a hit film and ‘Shock’ may fulfill his long waited wish. Hope it does not shock the director with some negative results. The screenplay and dialogues of the movie are also written by H.S Rajasekhar. The cinematography is done by Niranjan Babu.

If Suma can come close to what Urmila did in the Hindi version, the film will surely be a hit. Comparison between both the films is sure to happen and that’s why the entire cast and crew of the film would be under great pressure!

WASHINGTON - A new study has suggested that adding a face shield to the helmet worn by military pers...

PANAJI - 'West is West' producer Leslee Udwin Tuesday said she was disappointed to see nearly 40 per...
Copyright© 2010 The Gaea Times