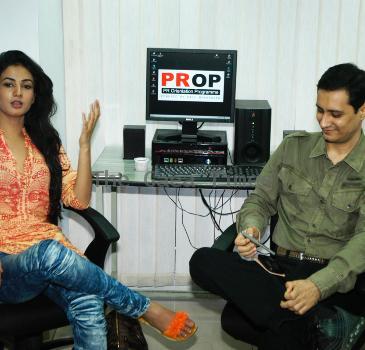 Simply yet glamorously decked up in fluffy orange sandals, faded blue jeans and a saffron kurta with the words “Jai Siya Ram” and imprints of Lord Hanuman on it, the mesmerizing actress dropped in at the office of Dale Bhagwagar Media Group at Heera Panna Commercial Complex, Oshiwara, Mumbai, where PROP was being held.

In her first ever interaction of its kind, Sonal, who was specially invited as a celebrity guest speaker for PROP, gave the workshop participants insights about her experiences in the entertainment industry. She spent time at the workshop, made friends with the participants, discussed about their aims, ambitions and future plans, and praised Dale Bhagwagar to the skies, for conducting such a media training workshop, specially designed for people genuinely interested to make a successful career and name in the entertainment industry and media professions such as marketing, PR, journalism, acting, filmmaking, event management, advertising etc.

“This is a unique workshop, firstly because of its exclusivity and limited number of participants,” said the actress. “Moreover, when you have a publicist like Dale Bhagwagar teaching you tricks and tactics in public relations, there is no doubt, you will score loads of brownie points in the process called life. Dale is one of the best PR’s our industry has to offer. What better than to learn about media maneuvers from the PR guru himself,” she told the participants, as the publicity specialist thanked Sonal for her glowing comments.

Sonal was bombarded with questions by the workshop participants, about the entertainment industry and its functioning and she patiently answered them all with a cool candid appeal and sparkling poise. She narrated several incidents, including how she won the Miss World Tourism title in Malaysia, and how the entire Mahesh Bhatt camp, showed immense faith and confidence in her as they launched her in ‘Jannat’, the famous film on cricket match fixing with Emraan Hashmi opposite Sonal.

She also spoke about her forthcoming film directed by the legendary painter M F Husain’s son Owais Husain. Tentatively titled ‘Pehla Sitara’, the film stars Sonal with another talented actor Anurag Sinha, who won critical acclaim for his debut performance in Subhash Ghai’s ‘Black and White’. Nearing completion, the movie is a love story, set in the backdrop of Punjab. It is expected to do the rounds of international film festivals, before being released in India and abroad.

Sonal was to interact with PROP participants for an hour, but the discussions were so charged and happening, she ended up spending almost three hours with them. Of course, all of the members loved every minute of it. Just as she left, Sonal invited the participants to join her on Facebook and keep in touch with her for any further queries. For the participants, that was the icing on the cake, as if Jannat had come down to them.

Meanwhile, enrollments for the next session of the PR Orientation Programme have begun and one can visit www.propworkshop.com for details. The forthcoming workshop will be of two -week duration from November 15 to November 26, 2010.

NEW DELHI - The National Commission for Protection of Child Rights (NCPCR) is preparing a comprehens...

For these HIV kids, life is all questions, no answers (Nov 14 is Children's Day)

NEW DELHI - They are chirpy, confident and full of the energy - like all children are - but for one ...

Of identity, art and a blindfolded artist's views

NEW DELHI - Not too far from a leading art gallery here stands an 800-year-old arched gateway amid t...

'Crook' about racial attacks on Indians in Australia (IANS Preview)

Emraan back to locking lips on screen

NEW DELHI - Bollywood actor Emraan Hashmi is back doing what he does best -- kissing. And this t...

Cleanliness drive initiated by singer Mansingh ahead of CWG