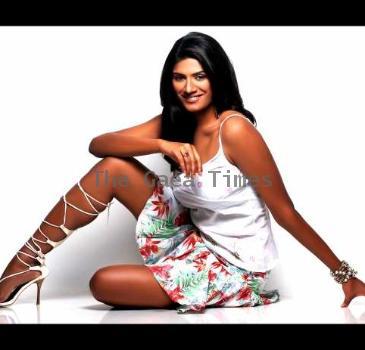 August 30, 2010 (Sampurn Wire): The tall and glamorous Khusboo Gupta who finished in the top 5 of the Gladrags Mega Model Hunt 2009, will soon be seen on the big screen by the year end. The sexy model is being flooded by offers not only from Bollywood but also from the South. This dusky beauty will soon be seen on the silver screen in the movie ‘The Flag’ as the lead under Silver Screen Pictures starring Ashmit Patel, Milind Soman, Vijayraaz et al. It will be released by Percept pictures by the year end.

Khusboo Gupta the young and promising model who walked the ramp at the recently concluded Chennai International fashion Week Season 2 is on a high. The event took off with the well known and well renowned designers showing off their collections. A source close to the model says, “Khusboo is very happy to be a part of the fashion event in the midst of the well renowned designers.” The ravishing model has also signed up to play a lead role with Tarak Ratan in ‘Journey’ which will be a south movie under the NTR Banner.

Khusboo Gupta will also be seen on the big screen sharing screen space as one of the leads with senior talented actors like Arshad Warsi and Manoj Bajpayee in ‘Ganit’ directed by Neeraj Phatak and also a film called ‘Chitkabrey’ as lead under Avante garde productions.

Friends close to Khusboo say, “Khusboo is very happy with the way things have turned out for her post Gladrags, but this glamorous model has her feet deeply rooted on the ground and is working hard as in most of the movies she will be seen in the de-glamorous avatar as she wants to do justice to her roles.” Khusboo Gupta has had a complete makeover from the glamorous modeling world to her deglamorise roles which she will be portraying on screen.

We hope that the dream run of the talented beauty continues and she makes it big on the bigger screen.

'Penal laws not for punishing people with unpopular views'

NEW DELHI - The Supreme Court has said, while ruling in the case of Tamil actress Khusboo, that crim...

DELHI, INDIA (GaeaTimes.com)- Khushboo who happens to be a prominent face of the Tamil Movie Indus...