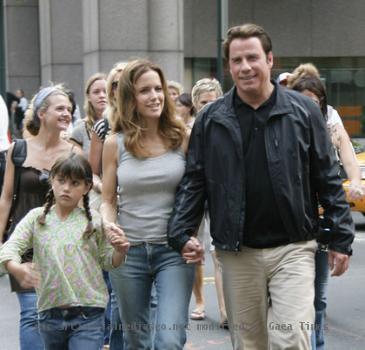 LOS ANGELES (GaeaTimes.com) — John Travolta and his wife Kelly Peterson have confirmed that they are expecting to have a baby boy very soon. The couple has confirmed this after dismissing the report of expecting a twin a few weeks back.

On August 8, Travolta and Kelly held a shower at their Los Angeles-area home in presence of some 40 close friends and relatives. Co-host of the shower, Keisha Whitaker gave the couple a surprise with a three-layer cake with a bird’s nest on top of it, “was a wonderful day.”

The soon-to-be-born baby will join 10-year-old sister Ella Bleu Travolta. Unfortunately, Travolta and Peterson lost their 16 years old son named Jett Travolta due to a fatal seizure at family’s holiday home in the Bahamas in January 2009.

According to the couple, the latest pregnancy is a miracle for them as they had “tried for several years” and never thought it was going happen to them.