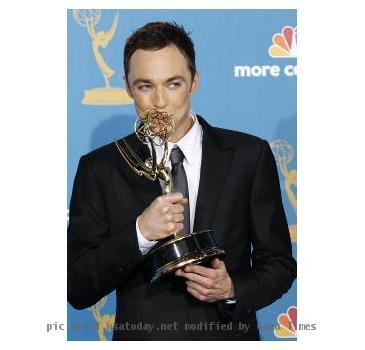 LOS ANGELES (GaeaTimes.com)- At the 62nd Primetime Emmy Awards that was held at the Nokia Theater, Los Angeles, it were the first-timers who swept the award ceremony from beginning till the end. Leaving behind Alec Baldwin of “30 Rock”, who held the prestigious award under the category of the best comedy actor for the last two years, Jim Parsons of “The Big Bang Theory” kissed the golden Emmy Statuette this year for the same. Jim Parsons on Sunday won his first Emmy Award for his role as a geeky physicist in CBS’ sitcom “The Big Bang Theory” whose viewership according to many has increase due to the brilliant performance of the actor.

Jim Parsons, who seemed visibly elated by the award, tried to express his happiness back stage in front of the media. The actor said, “It feels absolutely dream-like” to be recognized as the best comedy actor by the Emmy. He held that it feels like being in a dream and that he is waiting for “somebody to wake me [him] up”. However, the actor seemed confident about the show’s success in the coming seasons. As the show is scheduled to move to the Thursday slot this fall, Jim Parsons voiced that he is hopeful that the “loyal audience” of the show will watch the program wherever it is moved.

Jim Parsons, who won the award for playing the role of Sheldon, went on to guess reasons for the immense popularity and appeal of the character in front of the viewers. He maintained that it is most likely that Sheldon has been able to gain the interest of the viewers for his sheer difference from other guys. “He is in the minority of intelligence and behavior” said Jim Parsons about his character in “The Big Bang Theory”.

The Latest Push for Web Privacy in US is Welcome

The Advocacy group welcomed the recent move by US Govt for web privacy with new laws and new watchd...

TORONTO - Even before it launches its PlayBook early next year, BlackBerry maker Research In Motion ...
Copyright© 2010 The Gaea Times