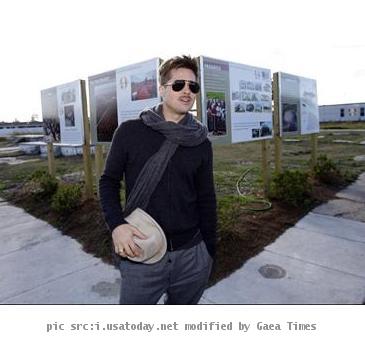 NEW ORLEANS (GaeaTimes.com)- Brad Pitt and his family visited New Orleans to mark the fifth anniversary of destructive Hurricane Katrina which ravaged the city. The actor, as a tribute to the Hurricane affected families, spoke about his feelings about the city and its people. The actor said in his recent interview that he and his partner Angelina Jolie likes to visit different places of New Orleans and see the energy-efficient homes his Make It Right Foundation built for families displaced by Hurricane Katrina.

Brad Pitt in his interview to a reputed media source said that the people of New Orleans are “great” and everybody treats them like neighbors and do not interfere in their personal matters. The actor called New Orleans as “sexy and sultry” and finds it to be the most interesting city of America. The “Legends Of The Fall” actor said that when Hurricane Katrina hit New Orleans five years back he was “gutted” to see people screaming for help form their rooftop. It was his instinct which told him to help these homeless people by providing them houses.

The actor also added that New Orleans is like an essential “world city” for him and he feels honored to be a part of the community. However, the actor also expressed that he feels sorry for the Hurricane affected people as the deadly natural disaster wiped away the houses in New Orleans. Brad Pitt also added that this was an “unfathomable” loss as the houses were wiped clean by the Hurricane Katrina. The actor said that there were only occasional pile of houses and nothing else after the incident.