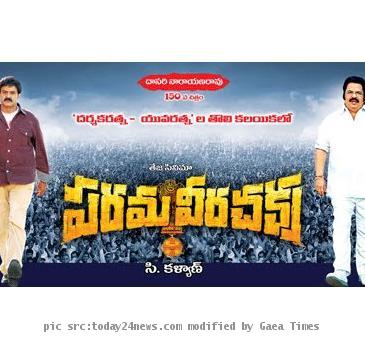 HYDERABAD, INDIA (GaeaTimes.com) — Nandamuri Balakrishna was caught sweating heavily during the shooting session of his upcoming film ‘ParamVeera Chakra’. Fans no need to worry, Balakrishna has not got blood pressure, he is perfectly fine. The fact is that the actor is doing some breath taking stunt sequences that causes the perspiration.

Telugu movie ‘ParamVeera Chakra’ is the 150th film of director Dasari Narayana Rao. So, he wants to make this film a totally different from the previous one. To mark ‘ParamVeera Chakra’ as a landmark film in his career Narayana Rao has opted for a patriotic theme for the movie. The movie is produced by C.Kalyan and will release under the banner of Teja Cinema.

Nandamuri Balakrishna is one of the most popular actors of Telugu film industry. He is the son of actor Nandamuri Taraka Rama Rao, also popular as the former chief minister of Andhra Pradesh. Besides being an actor, Balakrishna is a professional shooter.

The shooting of ‘ParamVeera Chakra’ is currently going on in the beautiful location of Ramoji Film City, Hyderabad. Balaya will be doing scenes with Amisha Patel, Rama Prabha from Wednesday. Some scenes of the movie will be shot in the picturesque ranges of Himalaya.

Are you waiting to catch Balaya in the thrilling action sequences? Then you have to wait for the action flick ‘ParamVeera Chakra’.