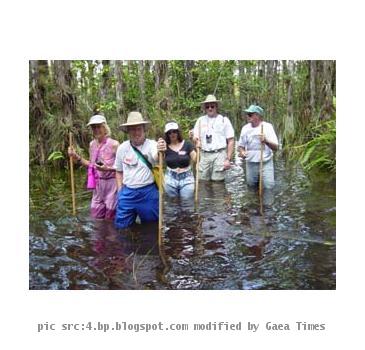 LOS ANGELES (GaeaTimes.com) — “Swamp People” is the History channel’s new reality show which was aired on last Sunday night. The show is focused on the descendants of the French Canadian refugees who settled in the swamps of Louisiana.

In the episodes, we get to see a fiercely independent group of people as they fight for their survival in the harsh condition of the swamps and also prepare for the alligator hunting season.

In one of the recent episodes, an experienced hunter is seen making weapon for his elder son. He makes special types of hooks that are ideal for the hunting of a particular creature that lives in water. A number of unique and eye-opening customs of the Swamp People are shown in the show that makes it a must watch for the TV audience. The episode showed how the humans have adjusted themselves to the almost inhospitable conditions of the swamps of the Atchafalaya Basin.

Despite of the rapid modernization, the family living in the swamp are trying their best to hold on to the ancient customs. The episode also showed the dangers of living in the natural environment as one of the teenaged family members were seen ignoring the danger signs while hunting and coming close to a disaster.

Hope you have also enjoyed the latest episode. If you have missed it, you can always check it out over the YouTube. Don’t forget to pour in your thoughts about this show.